A Christmas Carol: And Other Holiday Treasures (Word Cloud Classics) 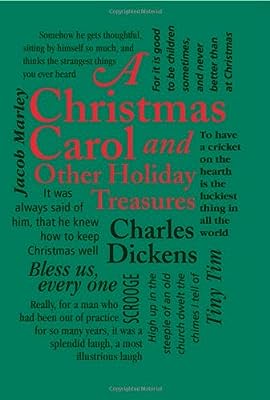 Price: $14.99
As of 2020-04-07 05:00:17 UTC (more info)
Product prices and availability are accurate as of 2020-04-07 05:00:17 UTC and are subject to change. Any price and availability information displayed on http://www.amazon.com/ at the time of purchase will apply to the purchase of this product.
Buy Now from Amazon
Product Information (more info)
CERTAIN CONTENT THAT APPEARS ON THIS SITE COMES FROM AMAZON SERVICES LLC. THIS CONTENT IS PROVIDED 'AS IS' AND IS SUBJECT TO CHANGE OR REMOVAL AT ANY TIME.

Brighten the season with tales from the master of Christmastime fiction.

Most famous in the realm of holiday literature for his 1843 publication, A Christmas Carol, Charles Dickens was in fact a prolific writer in the yuletide genre and a great contributor to many now-prevalent traditions of the holiday itself. In the year following the release of A Christmas Carol, Dickens released The Chimes: A Christmas Story of Some Bells That Rang an Old Year Out and a New Year In. This story combined his usual sympathy for the poor with the notion that we must always strive to live in nobler ways. In 1845 came The Cricket on the Hearth, a novella that, in its time, surpassed even A Christmas Carol in popularity for stage productions. The years 1846 and 1848 respectively saw published The Battle of Life and The Haunted Man and the Ghost’s Bargain. Given this wealth of Christmas-themed works, it is no wonder that Dickens is sometime referred to as “the man who invented Christmas.”

Perfect for both fans of Dickens’ work and those who just find special pleasure in the holiday spirit, these five Christmas stories are now available as part of the Word Cloud Classics series, providing a chic, inexpensive introduction to timeless tales.

About the Word Cloud Classics series:

Classic works of literature with a clean, modern aesthetic! Perfect for both old and new literature fans, the Word Cloud Classics series from Canterbury Classics provides a chic and inexpensive introduction to timeless tales. With a higher production value, including heat burnished covers and foil stamping, these eye-catching, easy-to-hold editions are the perfect gift for students and fans of literature everywhere.

The Legend of Sleepy Hollow and Other Ta...