The Walk: Previously published as To Reach The Clouds 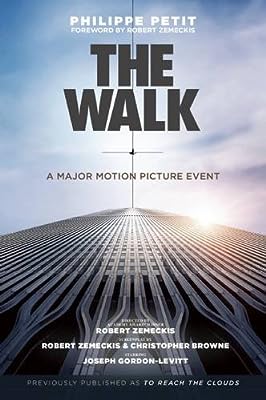 Price: $14.99
As of 2020-03-28 01:45:49 UTC (more info)
Product prices and availability are accurate as of 2020-03-28 01:45:49 UTC and are subject to change. Any price and availability information displayed on http://www.amazon.com/ at the time of purchase will apply to the purchase of this product.
Buy Now from Amazon
Product Information (more info)
CERTAIN CONTENT THAT APPEARS ON THIS SITE COMES FROM AMAZON SERVICES LLC. THIS CONTENT IS PROVIDED 'AS IS' AND IS SUBJECT TO CHANGE OR REMOVAL AT ANY TIME.

Now a major motion picture directed by Robert Zemeckis and starring Joseph Gordon-Levitt, an artist of the air re-creates his six-year plot to pull off an act of incomparable beauty and imagination.

More than a quarter century before September 11, 2001, the World Trade Center was immortalized by an act of unprecedented daring and beauty. In August 1974, a young Frenchman named Philippe Petit boldly?and illegally?fixed a rope between the tops of the still-young Twin Towers, a quarter mile off the ground. At daybreak, thousands of spectators gathered to watch in awe and adulation as he traversed the rope a full eight times in the course of an hour. In The Walk, Petit recounts the six years he spent preparing for this achievement, a tour de force of imagination and tenacity.

Petit’s achievement made headlines around the world. In this stunning book, Petit tells the dramatic story of this history-making walk, from conception and clandestine planning to the performance and its aftermath. It draws on Petit’s own journals, in which he sketched and scribbled everything from his budgets to his strategies for rigging a high wire between two of the most secure towers in the world. It is a fitting tribute to those lost-but-not-forgotten symbols of human aspiration?the Twin Towers.

Skyhorse Publishing, along with our Arcade, Good Books, Sports Publishing, and Yucca imprints, is proud to publish a broad range of biographies, autobiographies, and memoirs. Our list includes biographies on well-known historical figures like Benjamin Franklin, Nelson Mandela, and Alexander Graham Bell, as well as villains from history, such as Heinrich Himmler, John Wayne Gacy, and O. J. Simpson. We have also published survivor stories of World War II, memoirs about overcoming adversity, first-hand tales of adventure, and much more. While not every title we publish becomes a New York Times bestseller or a national bestseller, we are committed to books on subjects that are sometimes overlooked and to authors whose work might not otherwise find a home.

The Invention of Clouds: How an Amateur ...

Clouds of Glory: The Life and Legend of ...